Please join me in welcoming author Norwood Holland to Conversations today! Norwood is here to talk about his new novel, Material Witness! So be sure and check out the cover and blurb below! And don't forget to check out his interview too and get to know Norwood Holland. 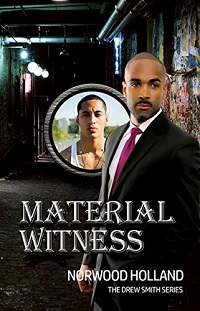 Material Witness is a legal thriller and the third novel in the Drew Smith series. The DC trial attorney undertakes a murder investigation of a law school pal. Smith recruits fellow lawyer Edward Miller and TV news reporter Stephanie Gilchrist. The three become entangled in a love triangle while Smith is coping with his post-traumatic stress disorder. Material Witness follows the series prequel Minus One expanding on Smith’s mental health issues as his PTSD progresses into the paranormal. Smith’s friend Medhat tragically died in Smith’s arms from a gunshot wound. The shock and Drew’s underlying guilt inflicted a post-traumatic stress disorder condition. The condition progresses with Medhat’s lifelike visits with Drew in his dreams.

Why should people read your book?

Material Witness is an enjoyable, easy read. The characters are clearly defined, and the suspense carries the reader from beginning to end. The series has an addictive quality, and you don’t have to start the series at the beginning. Each can be a standalone read, but most readers are left wanting more. People love Drew Smith, he has an emotional connection that invests readers. His bravado appeals to the male reader, while his good looks and hypersexual nature appeals to women. The reader derives pleasure in following Drew Smith’s emotional swings, his romantic woes, and his professional challenges.

Who are the audiences for your book?

Material Witness was written for those who love legal thrillers and mysteries, but it also has broad appeal for those who enjoy popular fiction. It’s sexy with a hint of romantic suspense. There is something there for those who prefer romance, as well as the action adventure reader.

What is the setting of your novel and how is it significant?

The setting is Washington DC, and why DC? It’s my home where I was born and bred. It’s a world-class city full lawyers and politicians, statesmen and foreign diplomats. There is a lot of glint and glamour, but if you dig below the surface, there is a dark side with its gritty crime and backstreets you can see the real human condition. There is a juxtaposition of the oppressed, poor people struggling to make a living in a world saturated with wealth. Cities create wealth, and that’s what draws people to them. Washington is a reflection of the American character with its monuments, and sprawling suburbs. It’s an ideal setting to tell an American story.

Does the protagonist or an associate of the protagonist narrate? Or does the author write with detached objectivity, able to read minds and interpret motives? How did this affect your perceptions of what is going on? Is this narrator a reliable witness of events?

Sleepless Night’s varied from the third person to first-person narration. And my skills as the writer were not as sharp as they are now. I’ve chosen now to write in a strictly first-person narrative from Drew Smith’s point of view. When I decided to write thrillers I learned the First person was the best method suitable for writing thrillers because it allows for a lot of immediacy and emotion that would serve a thriller well.

Would you say that the novel is primarily character-driven or plot-driven? Or is there an effective combination of the two?

I would say Material Witness is plot driven. There is a murder, and the pursuit of the murderer is the primary focus. But the significance of the character-driven subplots cannot be dismissed.

Who are the central characters? Where do your sympathies naturally lie? Are their motivations, flaws and qualities credible, or merely means to drive the plot?

My primary characters are Drew Smith and the people he interacts with on a daily basis. Julio is his best friend for life. He is Drew’s sidekick fighting alongside him in trenches. The women in their lives also play a significant role. They keep their men grounded and focused. The open way for us to see their vulnerabilities, their desires, ambitions, and goals. Without the women, there would be no window to their motivations, flaws, and credible qualities.

Do the characters undergo any significant change or development? Did any of their actions or words provoke reflection or further revelation about them as people?

Character evolution is each book is incremental, Drew Smith character is strengthened over the long term. The changes are not really discernable in each book. But I have a five book vision of the series which I plan to develop into a cable TV series, but right now each book is plot driven. Drew is coming to accept his mental health infliction. The future problem how will he deal with it. Is there something good that can come from it? 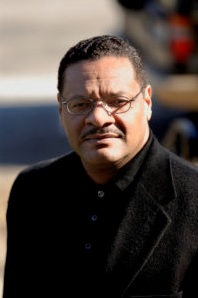 Norwood Holland is a freelance writer, lawyer, and author of the Drew Smith legal thriller series based on the capers of a bon vivant DC trial attorney. Holland is a graduate of Howard University School of Law and earned his degree in English from Fisk University where he studied under the renowned Harlem Renaissance author Arna Bontemps. He has served in several government agencies including the National Labor Relations Board and several top Washington law firms. In the mid-90s he began freelance writing with bylines in The Writer Magazine and the Examiner. He blogs at editorialindependence.com. Material Witness is third in the series launched with Sleepless Nights, followed by the prequel Minus One. Private Number the fourth series installment will be released in early 2019.