It is my pleasure to have author Chicki Brown on Conversations today!  Sit back with a cup of coffee and read an excerpt from her latest book, Ain't too Proud to Beg.
Lisa~
______ 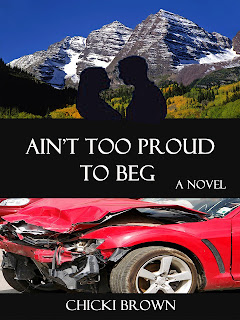 AIN'T TOO PROUD TO BEG by Chicki Brown

Hollywood film star Vaughn Breland has destroyed his beloved Lamborghini, lost his latest movie role, the use of his legs and possibly his fabulous good looks. He’s depressed and mad at the world then he meets Trenyce Clark, his new physical therapist. Trenyce, and her beautiful three-year-old daughter, give him a new outlook on life.


“Reese, how are you?” I couldn’t wait to hear her explanation of why it took this long to call.”
“How am I? Why didn’t you call me and let me know you were all right?”
I almost checked out, and she has the nerve to have an attitude? “My phone died.” And I almost did too. “I’m recovering pretty well. Thanks for asking.”
Her tone softened. “I’m sorry, but I just thought all this time I hadn’t heard from you because you were mad at me.”
Insecure women were such a pain in the ass. “Now aren’t you glad you didn’t come along?”
“That’s not funny, Vaughn. I’m so happy you’re okay.”
“Has the media given any details?”
“What kind of details?” she asked, sounding suspicious.
“About my injuries.”
“No, the report I saw just said you were in a serious car crash. Why? Is it worse than they made it sound?”
“You could say that. My face is jacked up. I broke both my legs and dislocated my hip.”
“Oh, my God!” she whispered. “So, how long will you be in the hospital?”
“I’m not in the hospital anymore. Craig Weinstein is letting me stay with him until I can get around on my own.”
“Did they tell you how long it would be?”
“They don’t really know. Physical therapy might take a year.”
“What!” Vaughn held the phone away from his ear at the shrill volume in her voice. “So, what’s going to happen to us with the film?”
Ah, that’s all she wanted to know. She’s worried about her job. Apparently the studio hadn’t yet informed the cast of their decision to replace me, and I wasn’t going to be the one to tell her.
“Us? Or you?” Silence. “That’s what I thought. I have to go, Reese.” I clicked off my cell and closed my eyes, meditating on what she had just said, but I had no reason to be disappointed in her. From the first day’s read-throughs in the studio conference room, I’d known a hook-up with Reese was inevitable. She’d seemed thrilled to meet me. That’s why I liked young actresses. So many of them were easily impressed and more than willing to do whatever it took to get to the top. Fortunately for me, they were clueless that I couldn’t do jack to get them there.  From the beginning I’d known she was only sleeping with me because she assumed it could advance her career. Yet, the fact that she hadn’t shown the slightest bit of personal concern for my situation irked me more than it should have.
What had I expected? Over the years, Devon had repeatedly told me, “Those hit and runs might serve your immediate needs, but one of these days, you’re going to need a woman by your side. One that cares about you more than anything or anyone else in the world.”

Order Your Copy of AIN'T TOO PROUD TO BEG: