It is my great pleasure to feature Page International Screenplay Award winner Pat White on Conversations today.  Sit back with a cup of coffee and check out what it was like to receive the news for this fabulous win!!  Also check out her latest romantic comedy book, GOT A HOLD ON YOU. 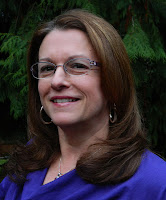 A little about Pat White:
Pat White started her writing career as a newspaper reporter and public relations manager before discovering her passion for writing fiction and screenplays. She is a Romantic Times Reviewer's Choice winner for Best Contemporary Romance (Ring Around My Heart, 2004), and Grand Prize winner of the Page International Screenwriting Competition for her YA thriller, Escape. Pat writes romantic comedy, romantic suspense, young adult romance and paranormal romance. You can find her at: patwhitewriter.com.

One of the highlights of my writing career was the day I found out I’d won the 2011 Page International Screenplay Competition with my YA thriller, “Escape.”  I was at Starbucks with my husband picking out an afternoon movie (of course!), when I decided to check the Page website. I glanced at my category, saw that I didn’t take first, second or third place, and quickly closed that screen.  But just as the screen went black I thought I saw a flash of my name as the Grand Prize Winner.  Completely freaked out I checked the site again, double checked the cash prize and shoved my phone at my husband.  “I think I won something.”

Boy, did I ever.  Once he checked, and my name came up as Grand Prize winner on his IPhone as well, reality hit me square in the chest — I really won the top prize!  Besides a wonderful cash prize and a bunch of cool stuff, what did this mean?

After the initial shock came the 25 queries from agents, managers and producers.  I had so many questions I thought my head would explode.  What happens next?  A six-figure movie deal? (You can stop laughing now

Luckily, I’d entered many contests as a novelist—was a six-time Golden Heart finalist, but never won—and remembered one very important comment from a Silhouette editor judge:  “Just because you win a contest, doesn’t mean you’re ready for publication.”

Great advice.  If you’re a screenwriter you know how hard it is to get features made in Hollywood these days, so I was realistic about my win.  At that point in my career my goals were:


Upon telling my book agent my news, she asked if she could pass along my script to a film manager she worked with.  A few days later, the manager called me asking if I wanted to sell the script and let it go, or if I considered myself a screenwriter.  “I’m a screenwriter,” I said, trying not to sound embarrassingly enthusiastic.

For the next six weeks, my manager worked with me scene by scene on “Escape.”  Goal #1 was met:  I was becoming a better screenwriter through her knowledge and expertise.  I’d also met Goal #2 in that she offered to represent me.

Keep in mind I’ve had four book agents in my career, all of them good, but for one reason or another I needed to move on.  When shopping for my current agent, I’d figured out the “deal breaker” issues for me: Will she get back to me in 24 hours?  Will she fight for more money?  And most importantly, does she LOVE my work?  Once I figured that out, I applied the same principles to signing with a film manager.  As I checked off “yes” to all my qualifying questions, I was thrilled to become a represented screenwriter.

About six months later, my manager became an agent with Gersh LA and continues to represent me.  Her knowledge about the business is amazing.  She’s suggested I write a book series and adapt it to television (I’ve always LOVED television) so I’m onto the next stage in my screenwriting journey.

In the meantime, my book agent is shopping the novel version of “Escape,” which we hope will spark interest in the script.

Here’s is the logline for “Escape”:

“After her parents are killed in an explosion, 17-year-old Jade Masterson is hunted by a mysterious organization that wants to control her telekinetic powers.”

A writing career requires patience, determination and talent.  I list patience first because it helps to embrace the fact that things can happen slowly, but with each little step we get that much closer to achieving the dream of being a paid screenwriter.

In the meantime I’m still writing books and will jump into the indie publishing world this month with “Got A Hold on You,” the first book in my romantic comedy series set in pro wrestling.

Wishing you the best of luck with your writing endeavors!

Order your copy of her latest romantic comedy book, GOT A HOLD ON YOU.