On Conversations: Excerpt of SAFE FROM THE DARK by #Author Lily Rede

Please welcome Lily Rede on Conversations today!  She's here to talk about her latest romantic suspense release, SAFE FROM THE DARK, and she's provided an excerpt of the story for you to enjoy.  So sit back with a cup of coffee and read all about this new fantastic series from Lily Rede.

First, a little about Lily Rede:

Lily has been writing since she was ten. She lives steps from the beach with a bunch of semi-feral cats and two goofy dogs who are forever tracking sand into the house, but she loves them anyway. She has lived all over the world and jumped into writing full time when her cubicle city became too confining. Lily writes hot contemporary romance, paranormal, and works of ludicrous fantasy, depending on her mood. Titles include: BUILD ME UP, POUR ON THE HEAT, HOT FOR JOE, PASSION & PUMPKINS, MY FAIR HEX, and HOT & SWEET - BEGINNINGS.
_______________________

Writing romantic suspense basically means that you spend a lot of time thinking about how to kill people and how to get away with it. Pretty ominous, right? There’s something so satisfying about twisting circumstances to paint characters into the most stressful corners imaginable. Add a strong female lead and a distractingly hot love interest to get in her way, and stir. There are a million ways to do it, and it’s easy to get lost in that world, pushing the stakes higher and higher and higher. In SAFE FROM THE DARK, Bright’s Ferry is a nice little town filled with nice people, but under the surface lie dark secrets and dangerous obsessions. Colin and Evie were such fun to write – equally stubborn, equally incapable of resisting the passion that flares between them. I’m looking forward to continuing the series with SAFE FROM THE FIRE, where eccentric librarian Grace tries very hard to ignore what she feels for hot firefighter Matt, who has a few secrets of his own. I almost feel bad for Bright’s Ferry – in my mind it’s such a pretty, quiet little seaside town. By the time I’m done with it, maybe not so much. Happy reading! 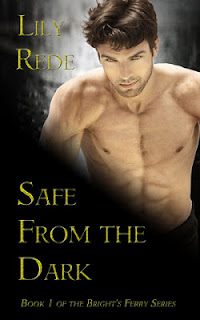 About Safe from the Dark:

Nursing a broken heart and a couple of bullet wounds, no-nonsense Evie Asher leaves her career with the NYPD to move into her grandmother's old house in a small New England town in the middle of nowhere. She wants nothing more than a new start and a chance to forget the mistakes of the past and get her life back on track, minus the shootouts. Her plans are shattered when her new neighbor, the town's hunky young mayor, starts receiving death threats from a dangerous stalker. Evie is unwillingly drawn back into a world of peril, and while her bruised heart tries to resist the out-of-control sparks that zing between them, she is forced to stay close to keep him safe as the stalking quickly turns to murder...

Colin Daniels has his hands full running Bright's Ferry as their popular and busy young mayor. He doesn't have time for stalkers or threats, much less a lovely gray-eyed cop with control issues who insists that the stalker is a member of the community, someone he knows and loves. When the situation takes a deadly turn, Colin finds that he has no choice but to give up some control himself and rely on Evie to protect him until they can unmask the killer. Passion sizzles between two stubborn hearts as they clash over the best way to handle a dangerous situation, but can they keep each other safe as the dark closes in?

“Stay.”
EVIE’S HACKLES ROSE AT the stern command, but she felt terrible, so she’d give him a pass on this one. Besides, the guy had rescued her from drowning and built her a lovely fire that was filling the room and her bones with beautiful, drenching warmth.
His hands felt good.
Thinking about that wasn’t productive either, so she focused on getting warm, watching Colin putter around her grandmother’s kitchen like he owned the place. She hadn’t been here since she was a little girl, and while the bones of the cabin were the same, her grandmother’s warm presence was missing, all of her knick knacks and beloved books packed away somewhere.
Probably in the attic, thought Evie, determined to investigate when she felt better. She’d sold most of what she owned, put a few boxes in storage, and the rest of her worldly possessions were in the car, currently stuck in half a foot of mud down the hill. Her knapsack held her holster and gun and a few essentials, and that was it. All of her former life encompassed in a few portable items. Evie swallowed a lump in her throat.
Enough of that, Asher. You’re here. You’ll put down roots in this town, where Gram lived. Where everyone knew her and loved her, despite what Mom did. Despite what you’ve done.
A knock had Colin turning off the kettle and opening the door to a small woman in a pink slicker. Her brown hair was damp and curling and shot through with silver, and her face, though a little crinkled, had the sharpest eyes Evie had ever seen. She carried a doctor’s kit and a huge bag of takeout, which she unceremoniously shoved at Colin. The mouthwatering aroma of peanut noodles and Tom Yum soup had Evie’s stomach growling – it had been hours since lunch.
The woman shrugged off her slicker, handed it to Colin with a pointed glance, and marched over to the couch. Evie carefully pulled herself to a sitting position as the woman perched on the cushion by her hip, taking up her wrist to feel her pulse.
“Well, Evie Asher, I was wondering when you were going to show up.”
Evie’s jaw dropped.
“How do you know who I am?”
The woman snorted and let go of her wrist to place a cool, firm hand on her forehead.
“Who else would Fran leave the cabin to? Besides, I never forget a baby I brought into this world. Not that one – ” she said, jerking her head at Colin, “– and certainly not you. And you’re the spitting image of your mother.”
Evie’s heart sank. Life in Bright’s Ferry was going to be difficult if everyone immediately compared her to her mother. Her dismay must have shown on her face, because the woman chuckled.
“Don’t look so worried. What’s past is past, and you were just a little girl when all that nonsense took place. You’re back where you belong.”
She tugged Colin’s jacket away from Evie’s torso.
“I’m Dr. Griggs, but call me Jocelyn. Now, let’s see what you’ve done to yourself.”
Evie didn’t think to protest as Jocelyn helped her out of the sweatshirt. The doctor frowned at the bandages, noting spots of blood on her side seeping through the white tank top.
“Colin,” she said, “See if you can find some sheets and blankets in the boxes in the attic and make up the bed in the guest room. It’s closer.”
Colin nodded and left the room without a word, though Evie could practically feel his eyes on her, eagerly soaking up every word about her past. Obnoxious.
Jocelyn winked.
“Make the man at least buy you dinner before he gets to see your lacy bits.”

Order your copy of SAFE FROM THE DARK at AMAZON

Safe From the Dark (Volume 1)