On Conversations: Excerpt of The Knife in my Back by Stacey Covington-Lee #AAMBookclub

The Knife In My Back by Stacey Covington-Lee
Synopsis:
Brook Mansfield was born into a life of privilege. She had a family that loved her and all of the advantages that came from being rich, smart and beautiful. She also had friends, one of which was Tameka Williams.
Tameka was a desperate woman looking to gain fortune, fame and love at any cost. Despite the warnings from others, Brook took Tameka in and tried to love her as a sister. However, after taking the one thing that meant the most to Brook, it was time for the tables to turn. Tameka had used and betrayed her for the last time.
Excerpt:
Wayne held Tameka while she sobbed. He was so confused as to how to handle or comfort her. He had never seen someone so obsessed with someone else’s life. He could not understand why she couldn’t be happy with the life that she had made for herself. Couldn’t understand why she couldn’t be happy with the life that they could build together. And as he held her, Tameka came to the realization that he didn’t know and would never understand her. She would never be able to get him to see things from her point of view. So she decided to dry up and let him believe that he helped her feel better and that her little tantrum was over. She would keep her feelings to herself from now own.
“Tameka, I promise you that together we will make a great life for ourselves. We will have our own family and a beautiful home. You’ll be proud of the life we make together. I promise.”
“I know, baby, I guess I just had to get all of this off of my chest. Jealousy is an ugly thing and I hate that I let it do this to me,” Tameka said with an ugly smirk on her face.
She didn’t mean a word of what she was saying and Wayne should have realized that. But instead he chose to believe what made him feel better about his beloved, Tameka. He would learn soon to see her for what she was and not the woman he wanted her to be. But for now, he held her in his arms and held on to the dream that he had of the wonderful life he wanted them to share.
Biography: 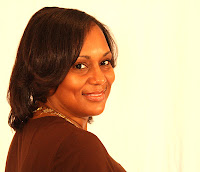 Stacey Covington-Lee is a native of Atlanta, Georgia. She has written multiple manuals and training guides for various companies and local government. However, it was her love for literature that led her to pin her first novel in 2009. Since that time, Stacey has written several short stories and two additional novels. Her first published novel, The Knife in My Back, was re-released by Delphine Publications November 2012.
Stacey continues to live in an Atlanta suburb with her family and is currently working on her next novel. Visit her at www.staceycovingtonlee.com for a full chapter excerpt of The Knife In My Back and a sneak peek at her second novel, The First Cut Is The Deepest.
Get to Know Stacey:
Q. How old were you when you first started writing and what motivated you?
A. I was around eleven years old when I read a book by Judy Blume called Are You There God? It’s Me Margret. Something about that book lit a spark in me and set me on a journey to write my own pre-teen novel.
Q. What inspires your writing?
A. I am inspired by the people around me. I love watching how folks interact with one another , how they speak to each other and what angers them or brings them joy.
Q. Your novel, The Knife In My Back, primarily focuses on the relationships between female friends, why is that?
A. There are numerous books that discuss the male/female relationship. However, the relationship between girlfriends can be so complex and at time so difficult that I felt it deserved to be highlighted.
Q. Does the book primarily focus on the negative aspects of friendship?
A. While the relationship between characters Tameka and Brook is a very volatile one and dominates the storyline, there is also the loving and supportive friendship between Mia and Brook and it celebrates the kind of friendship we all long for.
Q. Was any part of this book based on real life experiences?
B. I think that we have all had to deal with a troubled friendship at some point in time, but fortunately I’ve not had a female in my life that has presented me with the evil and deceptive ways that Tameka possess.
Q. Would men also find your novel interesting or do you think they would view it as a “chick novel?”
A. Men would absolutely find the novel entertaining. It’s a great story with wonderful male characters. The men in this book are strong, successful men that support and love their women. There’s no male bashing here, but plenty of lust, love and drama.
Q. Can we expect to read more from you in the near future?
A. Yes, you can look for my next novel, The First Cut Is The Deepest, to hit bookshelves early 2013. It is the follow up to The Knife In My Back and begs the question, are some people beyond redemption?
Contact Info/web links:
www.staceycovingtonlee.com; Twitter @covingtonlee; Facebook/StaceyCovingtonLee1; email lee27495@bellsouth.net
Book Available:
http://www.amazon.com
http://www.barnesandnoble.com
https://www.smashwords.com/books/view/252011