On Conversations: #author Mona Risk with her #newrelease and a #giveaway

Please welcome author, Mona Risk to Conversations today! She's here to talk about the latest release in her Holiday Babies Series, Mother's Day Babies. For a chance to win a copy of Mother's Day Babies, all you have to do is answer her question below at the end of her excerpt. 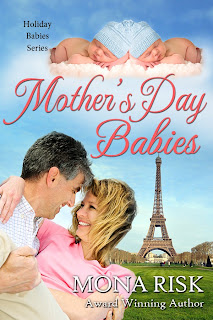 Thank you Lisa and Ginger for inviting me to your blog and giving me the opportunity to introduce my latest release, MOTHER’S DAY BABIES.

The heroine, Barbara Ramsey, could be your sister, your cousin, your neighbor or dear friend—a woman who met a wonderful man years ago, fell in love and married him. Together they worked and struggled to raise beautiful children and give them a good education. A happy couple many envy, they understand and support each other.

But suddenly their world shattered. He dies of a heart attack or a long painful cancer.

After thirty wonderful years with a man she’s always adored, she’s alone and lonely, and she tries to continue the same life on her own. A mother in the true sense of the word, Barbara helps her daughters, babysits her grandchildren, volunteers at the church, and makes an effort to visit with her friends.

She claims that her life is perfect. But she misses a man’s hugs and kisses and warmth. At night she cries and feels empty. Will she always be a mother and a grandmother—and a lonely woman when her children don’t need her anymore?

How about being a woman again, Barbara?

Let’s hear it from my heroine, Barbara, who lives and breathes for her five grownup daughters and their babies.

“I can’t go to Paris with that gorgeous man.” Barbara Ramsey scowled at the full length mirror in her bedroom, turned around, and glanced over her shoulder at her reflection. “This dress looks even worse from the back.”
“Nonsense, Mom, I hope I look that great at your age.” Standing in the master bedroom beside a gaping suitcase, Heather rolled her eyes. “After raising five daughters, one would expect a little extra flesh here and there. No big deal. A nice outfit will camouflage the bulges. Madelyn, hand me that black thing.”
Her lips pinched, her eldest held out the long silk dress. “Too old-fashioned. Mom, you need a new evening gown.” Madelyn extracted two velvet sweat suits from the closet and shook her head. “Definitely not good for Paris. We need to go shopping.”
“Why would anyone expect me to play the dating game at fifty-five with forty extra pounds on my hips?” Barbara pinched her side. Yep, definitely more than two inches there. Not that she usually cared about her weight, but under the circumstances...
Instead of commiserating, the two young women burst out laughing. If Roxanne, Claire and Tiffany were here too, the five of them would have a swell time ganging up on her with comments and advice.
“Mom, you’re beautiful.” Heather grabbed her mother’s shoulders and spun her back toward the mirror. “Look at your pretty face. You have almost no lines. How many people had told you that you look like our big sister?”
“You’re too kind, sweetheart.” Barbara patted Heather’s cheek. “So what if I have good genes. I still can’t go to Paris with your sister’s boss.”
“Mom, let’s put things in the right perspective. You’re not going to Paris as Lou Roland’s date. Roxanne and her family will be there too.” Madelyn threw aside the outfits she’d been holding and rubbed her mother’s back.
“You’re just accompanying Roxanne on a business trip to France for two weeks,” Heather added. “Why do you assume he has an ulterior motive?”
“I don’t assume anything. I just don’t know him very well. It’s been two months since we met at Roxanne’s friends’ wedding and I haven’t seen him since.”
Madelyn planted her fists on her hips. “Lou calls you several times a week. You told me you chat and laugh for hours. You even called him your best buddy.”
Heather chuckled, her blond ponytail bouncing on her back, and tapped her sister on the shoulder. “I bet you’re not aware that she even sent him a box of her famous cookies.”
“No way!” Madelyn’s censorious look annoyed the heck out of her mother. “Well, well, if your friendship with Lou has reached that level, I don’t see the problem. It’s about time you started living again.”
“My life is busy and perfect as is.” Barbara’s mouth twitched and she automatically reached to readjust the golden cover’s corners. She had a beautiful house, the same one where she’d lived with her late husband David for thirty years, and she still attended the same church where they were married. What more could she wish for?
“Come on, Mom.” Heather threw her hands in the air. “All you do is spend your days in the kitchen, cooking or baking for your grandchildren and church events.”
“And probably tasting your delicious food,” Madelyn added. “No wonder you’re putting on weight. It’s time to do something different and discover what the world looks like outside of Lexington, KY.”
“I regularly travel to Florida and—”
“Mom, visiting with my family and baking for the kids is not what I’d call a real vacation.” Madelyn shook her practical crop of blond curls.
Panic struck Barbara’s chest. Oh David, why have you left me? “Leave me in peace, you two. I’m a mother and a grandmother. Not a glamorous thirty-something bimbo like the women your sister’s boss usually dates.”

So what do you think? Should Barbara accept Lou’s offer to travel to Paris with his TV crew and her daughter? His compliments flatter her and she’d love to accompany her daughter on a business trip with Roxanne’s boss.

Is she letting herself in for more than she can handle?

For a chance to win a copy of MOTHER’S DAY BABIES, let me know how you would advise Barbara.

Blurb: Powerful News Director, Lou Roland is certainly not marriage material, yet he has suddenly decided he wants Barbara in his arms. Not an easy task when his pretty confidante from Kentucky proves so difficult to date—unless he follows her rules. Can the over-fifty confirmed bachelor and the widow loyal to her husband’s memory find true love and share a future?

MOTHER’S DAY BABIES is dedicated to the mothers we celebrate on Mother’s Day and those we remember with love.

Available for 99 cents at Amazon.com 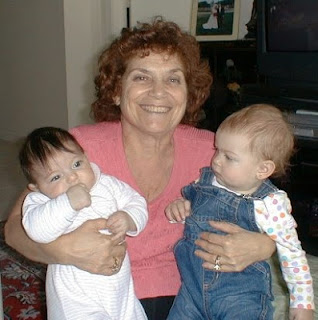 From chemistry in the lab to chemistry between people.

As a director of chemistry, Mona Risk traveled to more than sixty countries on business or vacation. To relax from her hectic schedule, she avidly read romance novels and mentally plotted her own books. Eventually she left a scientific career to share with readers the many stories brewing in her head. Mona likes to set her stories in the fascinating places she visits.

Other books in The Holiday Babies Series: