Please join me in welcoming the author of contemporary, historical, and inspirational women's fiction, Leigh Bale to Conversations today! Leigh is here to talk about her inspirational romantic suspense novel, Broken Trust. So be sure and check out the blurb, cover, and excerpt below! 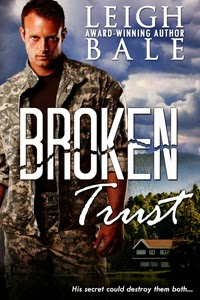 His secret could destroy them both...

Toni Hamilton is torn by grief after a special ops mission in Afghanistan claims the life of her brother. When a cryptic letter arrives from him one month later, Toni finds her own life threatened and the only person she can turn to for help is the man who may be responsible for his death.

Hoping to heal from the bullet wound in his leg and the guilt in his heart, Sergeant Michael “Mac” MacKenzie seeks solitude in Nevada at his remote cabin on Crystal Lake. When Toni shows up on his mountain, injured and frightened, Mac finds himself drawn into a volatile situation that could get them both killed. Now, he must find a way to protect Toni when he doesn’t know who to trust, including himself.


They moved in under cover of darkness. The purr of the Pave Hawk helicopter filled the parched night air. Inside the chopper, Sergeant Michael “Mac” MacKenzie sat back on the bench seat with the other members of his special ops team and took a deep inhale. Operation Mongoose had officially moved into action. Their mission: retrieve survivors and destroy top secret intelligence on board a downed U.S. military aircraft before the Taliban found it.
To ease the sudden pressure in his ears, Mac popped a piece of spearmint chewing gum into his mouth and chomped down. Sweat beaded his brow and he wiped it away with his forearm before adjusting the Kevlar helmet on his head. He tugged at the collar of his camouflage uniform and flexed his toes in his Oakley assault boots. Highly alert and ready for action.
Not much longer now.
From the open door of the chopper, the lights of Kabul glimmered in the distance as they left the city and traveled east toward the high peaks of the Hindu Kush Mountains. The dry heat burned his eyes and he blinked. Pitch black, the sky was alive with stars. It’d be morning soon and they hurried to beat the harsh, dusty wind that made it impossible to see and filled their clothes, eyes, ears and equipment with sand.
“In and out,” Major Carpenter, his commander boomed over the drone of the chopper. “We’ll reach the crash site, retrieve the package, and get out of Dodge before the insurgents know we’re there.”
Lieutenant Gordon, the team’s explosives expert, flashed a thumbs up. Simple and routine.
Yeah, right. With all the missions Mac had been on, not one of them had been simple. Or safe. But this time, something about the impending danger made his pulse trip into double-time. Adrenaline. A rush he found strangely exhilarating.
He glanced at the six other men on his team, squinting to see their expressions in the dark. Lieutenant Eric Hamilton, their intelligence officer and Mac’s best friend since childhood, caught his gaze. Mac knew Eric better than anyone. Eric hated flying and usually showed a cheesy grin to cover his nervousness.
Not tonight.
Even in the low light, Mac caught Eric’s somber expression and tight lips. A subtle tension settled in Eric’s shoulders and clenched hands.
Something was wrong.
For the past two days, Eric hadn’t been himself. Yesterday, Mac had asked what was bothering him, but Eric brushed him off, promising to discuss it later when they had more time. It probably had something to do with the letter Eric insisted on mailing home to his two sisters.
Family trouble.
Cara, more than likely. Since their parents had died last year, Eric’s teenaged sister had become nothing but bad news. Toni was doing her best to run the family shoe store and finish raising Cara, but the situation wasn’t easy at home.
Eric’s eyes locked with Mac’s for several seconds, then his gaze slid away. Mac would find out the problem in the morning, after they’d completed their mission and returned to their barracks for a good meal. He wouldn’t let Eric put him off any longer.
No one spoke. Each man’s gaze darted to the chopper door where the barren landscape whizzed past in a blur of shadows. Nothing but the scorched remains of poppy fields, mountains and rocks. A country decimated by war, bloodshed and hate.
Mac sighed inwardly. Next week, he and Eric would fly home and spend time fishing with Dad on Crystal Lake in Nevada. Mac might even drive in to Vegas and visit Eric’s family. With any luck, he’d get invited to supper. An excuse to see Toni again.  The woman he loved like crazy. 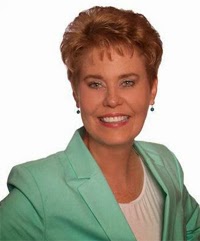 Leigh Bale is an award-winning, multi-published novelist who won the prestigious RWA Golden Heart in 2006.  More recently, she was a finalist for the Gayle Wilson Award of Excellence.  She is the daughter of a retired U.S. forest ranger, holds a B.A. in History with honors, and loves spending time with family, weeding the garden with her dog Sophie, and watching the little sagebrush lizards that live in her rock flowerbeds.  Married in 1981 to the love of her life, Leigh and her professor husband have two wonderful children and two grandchildren.  But life has not always been rosy.  In 1996, Leigh’s seven year-old daughter was diagnosed with an inoperable brain tumor.  In the dark years that followed, God never abandoned them.  After six surgeries, two hundred and eighty-four stitches, a year of chemo, and a myriad of other difficulties, Leigh’s daughter is now a married woman and considered less than 1% survivorship in the world for her type of tumor.  Life is good!  Truly the Lord has blessed Leigh’s family.  She now transfers the love and faith she’s known into the characters of her stories.  Readers who have their own trials can find respite within the uplifting message of Leigh’s books.  You can reach her at www.LeighBale.com.