The Marriage Contract featured on Kindle on the Cheap/The Cheap Nook Today!

I'm always excited when one of my books is picked up to be showcased by a blogger or review site.  Today I am Author of the Day on Kindle on the Cheap and The Cheap Nook for THE MARRIAGE CONTRACT!  I love this book because it's a romantic comedy and I just have a thing for that type of story.   Here is a little bit from THE MARRIAGE CONTRACT. 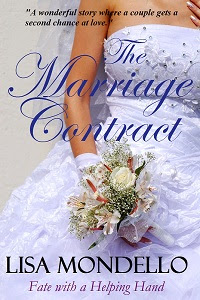 The trouble is, Ruthie can't stand Cara's boyfriend and Cara is just stubborn enough to push in the opposite direction of what her mother wants.

“Yes, but...” Puzzled by her query, Devin picked up the card again and turned it over in case he’d missed some important piece of information. The search proved futile.

“Cara will be thirty-five next week.”

“Well, then you know what that means, don’t you?”

“Do you or don't you intend to honor that contract, young man.”

A grin tugged at his lips. Although Ruthie's voice held a hint of amusement, he sensed her taking this line of offense immensely serious.

Knowing in advance how Ruthie Cavarlho operated, he proceeded with caution. “Ruthie, it’s not really a contract.”

“Yes, but…it’s bogus. There was no serious intention of marriage by either of us, no meeting of the minds. No-”

“Devin, dear, don’t talk to me in legal mumbo jumbo. I don’t understand a word of it.”

There was silence on the other end of the line for a few seconds. Devin picked up the ball point pen he'd strangled earlier and started tapping in his desk to fill in the void.

“I'll bet she doesn't,” she proclaimed, an undertone of hope resonating in her words. He could almost hear the wheels in her head spinning triumphantly when she declared, “What she doesn't know won't hurt her.”

A grin tugged at his lips. “Ruthie, what are you up to?”

Even though I wrote this book more than 12 years ago, I still manage to laugh!  You can get The Marriage Contract at these online retailers.

Email ThisBlogThis!Share to TwitterShare to FacebookShare to Pinterest
Labels: iTunes, kindle, kobo, Lisa Mondello, Nook, THE MARRIAGE CONTRACT
Newer Post Older Post Home
This site participates in the Amazon Affiliate Program where the site owner receives payment/credit for books sold by clicking through to Amazon. Clicking on the slideshow or carousel will bring you directly to Amazon.