Excerpt of THE MORE I SEE - Book 3 of Texas Hearts

Let me start out my post by saying that I'm hanging my head in shame.  I had every intention of having the 3 books in the Texas Hearts series available 1 week apart.  I love reading series books one after the other so I'm fully aware of how much I'm frustrating some of my readers by being late with the 3rd installment of THE MORE I SEE.  It's okay, you can comment here and tell me how mad you are at me.  I won't mind.  I deserve it.
But alas, I was being ambitious.  Life gets in the way and THE MORE I SEE has been delayed.  My hope is to have it uploaded to Smashwords, Amazon and Barnes and Noble by the end of the week.  When I do, I will post here and let you all know.  So keep checking back.
When I wrote my Texas Hearts series, I always knew that Cody, Beau's brother, was the "handsome one" of the bunch.  Girls loved him.  He was sexy, successful, arrogant and the to-die-for cowboy hero that makes a woman want to be on his arm.  So pairing him up with Lyssa McElhannon, a guide dog training who was a Plain Jane was an interesting dynamic.  Having a reversal of roles where she had been blind most of her life and could now see, and he'd had his eyesight was now blind, was also an interesting dynamic.  I wondered how they viewed life and what living really was.
I won't say more except to mention that this story was inspired by a friend of mine, who'd been blind for about 8 years, and trained with a guide dog.  I'd been so in awe of the relationship between handler and service dog that I knew I needed to write a story about this special relationship.  Otis, the wonder dog/guide dog in THE MORE I SEE, was inspired by the real Otis that helped give my friend the freedom of movement while living those 8 years in her dark world.
But this story is so much more than just finding life again after a debilitating accident.  It's about confronting the deepest fears we have as humans and trusting enough to allow someone to see the real beauty inside.
While you're waiting for THE MORE I SEE to be released, I want to give you a chance to peek inside this book and see what's in store for Cody Gentry.  Here is an excerpt from THE MORE I SEE.  Enjoy! 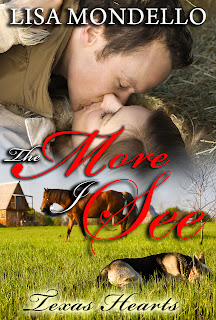 Email ThisBlogThis!Share to TwitterShare to FacebookShare to Pinterest
Labels: eBooks, Excerpts, Lisa Mondello, Texas Hearts Series, The More I See
Newer Post Older Post Home
This site participates in the Amazon Affiliate Program where the site owner receives payment/credit for books sold by clicking through to Amazon. Clicking on the slideshow or carousel will bring you directly to Amazon.