E-Release of Her Heart for the Asking February 8

Mark your calendar!  HER HEART FOR THE ASKING, the first book in my Texas Hearts series will be E-released for Kindle and Nook February 8th.  Kobo, Sony, Smashwords and iTunes will follow. 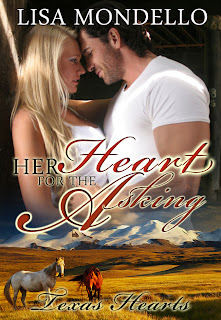 Mandy Morgan swore she’d never step foot in Texas again after Beau Gentry left her for life on the rodeo circuit eight years before. He once promised he'd love her forever.  But he'd abandoned their love for the rodeo and she hadn't seen him since.  Now she's back in Texas.  Her uncle’s heart is failing and Mandy has to convince him that surgery will save his life. She never dreamed the first thing she’d see when she stepped off the plane would be her biggest nightmare...the one man she’d never stopped loving.

Beau Gentry had the fever for two things: the rodeo and Mandy Morgan. But for Beau, loving Mandy was complicated by his father’s vendetta against her uncle and a promise he'd made to an old friend. Hank Promise, Mandy's uncle, was more like a father to Beau than his old man had been.  The hardest thing Beau had ever done was leave Mandy behind for the rodeo.  He can still see the bitterness and hurt on her face. It has killed him all these years to think Mandy had forgotten him...maybe even in the arms of another man. But now they’re both back in Texas, and Beau's going to do all he can to win back her love.
Posted by Lisa Mondello at 11:07 AM