Please welcome romance author Edie Ramer! She's here to talk about the second book in her Rescued Hearts series, Christmas at Angel Lake. So, check out the cover, blurb and excerpt! And 25 cents from every CHRISTMAS AT ANGEL LAKE book sold will go to the Washington County Humane Society in Wisconsin. That's awesome! 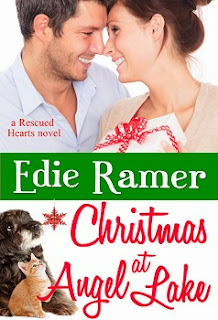 A kitten saved her…

Broke, pregnant and deserted by her boyfriend, Maddie Barrymore swerves to avoid a kitten while driving in a Wisconsin blizzard—and her life takes another turn. Like Puss in Boots, she stays in an empty house. She has the baby, the kitten, gets a job and a degree…yet every day she’s ready to flee if the real owner shows up.

Five years later, he does…

Dumped by the woman he loves, film producer Logan MacLeesh’s heart is as dark as one of his movies. He plans to hole up in his grandmother’s old mansion and throw himself into his work…until he discovers the sexy squatter and her four-year-old son. Before he can call the sheriff, Maddie’s tale of how she ended up there entertains him. They make a deal that as long as she tells him a story every night, she and her son can stay. Even the cat, though Logan’s always been a dog person.

A dog in need of saving…

Far away in another state, a homeless dog lifts his head, sniffs…and smells him. The human who’s meant for him. As he heads through the snow toward the scent, his journey seems impossible, even though it’s Christmas, a time when miracles happen.

The other shoe fell.
That was the thought in Maddie’s mind when he came downstairs as she was trying to find a show on TV in which men were not saying stupid things to each other in the mistaken belief that it was funny; in which woman were not being assaulted, chased, or horribly killed; in which housewives in full makeup and five-inch heels were not bullying each other.
She’d finally found her comfort station as he stepped into the living room, where he obviously was taking up too much air, because she felt a whoosh of oxygen leave her body. And she did not like it.
“HGTV?” he asked. “You planning on renovating a house?”
“Not this one, so don’t worry.” She spared him a glance then nodded at the TV. “That’s my perfect man.”
“A contractor?”
“A hunky contractor. He fixes things and has better taste than I do.”
“He’s probably gay.”
If it were anyone else saying that, she would wonder if he was jealous. Though why not him?
The thought cheered her, even as she wished it wouldn’t. If not for Zach, she would pack up and leave this place. She was only staying here because she didn’t want to uproot him. “Are you ready for your story for the night?”
“When your heartthrob is on TV?”
She leaned her elbow on the arm of the chair then rested her chin in her palm. She was so tired she might fall asleep in the middle of tonight’s story. “I’ll settle for seeing him in my dreams.”
“We don’t have the same dreams.”
“I can imagine what yours are like.”
He raised his right eyebrow and lowered his voice. “If you could, you would be running scared.”
“Did anyone tell you you’re a drama queen?”
He stilled. For a second, she wondered if she’d gone too far.
But what the hell. If she’d gone this far, why not go further?
“Why are you trying to scare me away?”
“Because you’re a mother who cares for her son. And because that son is tucked in his bed, sleeping.” He leaned in closer. “And because you want me as much as I want you.”
She sat back. But not too far back. She didn’t want him to think he frightened her. Didn’t want him to think he was right. “I couldn’t do anything with you, either. You’d always know you’d be second choice.”
His eyes narrowed, and she could’ve sworn she felt a freezing blast of wind whistle through the room. “And who’s first?”
“You forgot about the hunky contractor already?”
He blinked, as if he’d gone to a dark place and, in that instant, he stepped out of it. “If you’d like”—he lowered his voice so it curled around her—“I could show you my saw and hammer.”
“That would impress me so much. Will you let me hold them as you undress?”
His lips didn’t curve, but laugh lines crinkled around his eyes. “What do you plan on doing with the hammer and the saw?”
“You don’t want to ruin the surprise, do you?”
He straightened. “You are something else. I’m getting a drink.”
“A cold one, I hope. With lots of ice. Next time, don’t try to seduce me.”

In my stories, miracles are interrupted…but sometimes a few sneak through. I like to think miracles happen in life, too. Part of the reason I feel this way is because I was weaned on fairy tales. But when my mother unleashed me into the aisles of my local library, I gravitated to Nancy Drew. I also devoured comic books about Wonder Woman and Super Girl. My penchant for strong heroines who don’t wait for men to save them is reflected in my books.

I started my writing career selling short stories for mystery magazines and anthologies. I’ve published quite a few paranormal romances and I’ve even tiptoed into the sci fi romance genre. Now I write contemporary romance with heart and attitude and magic. I love writing a magical realism series set in the small village of Miracle, Wisconsin. These are stand-alone books, and anything can and does happen. Everyone gets a chance to tell their story, from a cat to a young blogger to a young woman to young seniors.

I don’t think I’ll ever get bored with this series. I hope my readers feel the same way. My goal is to make readers laugh a little, cry a little, and feel happy a lot.

I live in southeastern Wisconsin with my husband, dog and a very special cat. You can find me on my website, my personal blog, my group blog Magical Musings, Facebook and Twitter.