It is my pleasure to welcome mystery, vampire, and romance author, Michele Drier to Conversations today. She's here to talk about her novel SNAP: Happily Ever After? book six in her Kandesky Vampire Chronicles series. So, check out the cover, blurb, and excerpt. And as a special treat, Michele is giving us a glimpse into a day in the life of Maxie Gwenoch, heroine of SNAP: Happily Ever After?! 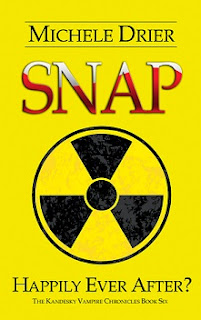 SNAP: Happily Ever After?
(The Kandesky Vampire Chronicles)

Loving Jean-Louis for eternity doesn't mean that Maxie Gwenoch will let him turn her. Jean-Louis is a vampire, is gorgeous, is the second-in-command of the Kandesky Family of Hungarian vampires, and is her boss at SNAP, the multinational, multimedia celeb gossip empire. She moves to Kiev to build a home with Jean-Louis and finds her future under a cloud from Leonid, a rival from the Huszar family, now living in a bolthole in the ruins of Chernobyl.  Will Maxie find safety by giving up her days and joining Jean-Louis in the vampire nights?


Excerpt from SNAP: Happily Ever After?

My satisfaction stayed until we were in front of Nik’s house. Jean-Louis was waiting outside. The joy of seeing him went out like a snuffed candle when I saw his expression. He was royally pissed and didn’t mind showing it in front of the demons.
He tilted his head at me, put his hand at the small of my back and steered me into the house. This wasn’t a gentle guide, he practically pushed me, hard enough that I bounced off the door frame into the library.
“What are you doing...” My voice rose an octave as I gathered steam for a snide comment.
“What in hell do you think you’re doing? I specifically told Taras to bring you directly to the house.” His voice was cold and his beautiful eyes were black with anger. His skin had paled so much I could see a vein throbbing above his left eyebrow and there was no hint of a glimmer. He was truly angry, which fed my own irritation.
“You told...you told! Why do you do that to me? I’m trying to gain gravitas as the Vice President for International Planning and supervisor of these bureaus! How do you think it makes me look when you give these orders to my staff?”
Oops. Jean-Louis’ lips thinned and I could almost take his pulse from the throbbing vein. “Do you forget who you are, who I am? Your staff? I think not.”
“All right. Yes, you’re my boss. You’re second in command of the Kandeskys. But you and the Baron put me in charge of this expansion and I have to have the supervision as well as the responsibility. If I give someone a task or an order, I need to know they’ll carry it out, not go running to you for permission!” My anger burned through any expectation of a happy homecoming, let alone hours of glorious sex.
“My permission? I’ve never stopped you from doing your job! I only step in when your hardheaded and reckless behavior threatens you or the family!”
OK, the gloves were off. “The family...” I began, then something, a premonition, a memory, slowed my words so that my brain could catch up.
Jean-Louis looked at my mouth, opening and closing like a landed trout at the Baron’s river. “Yes? What about the family? I always put them first?”

A Day in the Life of Maxie Gwenoch

Ever since I was hired at SNAP, the world’s largest, most prestigious celebrity gossip news gathering organization, my days have been...erratic.

I’d climbed my way up to the lodestar of SNAP by working at other celeb magazines, including Hello!, but none of those prepared me for this job. We have several international bureaus, nightly TV shows and publish seven different editions throughout the world, so travel was always a big part of my day.

Eighteen months later, it still is, but now I’m traveling from either the Baron’s castle in Hungary or my new home in Kiev. One small item that I discovered was the SNAP was owned by a family of five-hundred-year-old Hungarian vampires—the Kandeskys. And the second-in-command, Jean-Louis, is now my lover.

After a couple of run-ins with thugs hired by Kandesky rivals, the Huszars, I was named International Planning Editor for SNAP and moved from my L.A. home to the Baron’s fortified castle. And, boy have my days changed.

Jean-Louis wants to turn me and marry me, but I can’t give up my SoCal addiction to sunshine, so I’m living a weird modified vampire (or celebrity) life.

I usually sleep until the middle or the afternoon, when Elise, my maid, wakes me. Oh, did I mention that the Kandeskys are some of the richest people in the world? I live in luxury, with a staff that includes demons—bodyguards, security forces and the Kandeskys’ private army.

I spend a few hours every day on the computer, emailing, in virtual meetings, on Skype, keeping up with the bureau chiefs in London, Paris, Rio, Berlin. My most important connection is with Jazz in L.A.

She was my assistant when I started with SNAP and I promoted her when I took off for the forests of Hungary. Now she’s effectively doing my old job...Managing Editor for the SNAP magazines. We coordinate coverage, look for trends and upcoming names-in-the-news, recommend freelancers and paparazzi.

Once the sun sets, my time revolves around Jean-Louis.  We have a formal dinner—I eat, he drinks Bull’s Blood—and spend the next few hours reviewing the international TV shows, discussing business and making plans to finish off the last few Huszars. They’ve been living in the ruins of Chernobyl and we’ve had a few as “guests” in our basement “rooms”.

I’m asleep by six a.m. when Jean-Louis leaves me for his own bedroom, a drawback when the love of my life is a vampire.

Michele Drier was born in Santa Cruz and is a fifth generation Californian. She’s lived and worked all over the state, calling both Southern and Northern California home.  During her career in journalism—as a reporter and editor at daily newspapers—she won awards for producing investigative series.

She writes the Amy Hobbes Newspaper mysteries and the six-book Kandesky Vampire Chronicles paranormal romance series. The second mystery, Labeled for Death, was published in July 2013, and she’s just published her eighth book, SNAP: Happily Ever After?