Please welcome romance novelist, Marie Higgins! She's here to talk about her Victorian time-travel story, Love Lost in Time and she's giving away a paperback copy to one lucky winner from those who leave their name and email address in the comments section below! So, check out the blurb and excerpt from her thrilling novel and be sure and leave a comment! 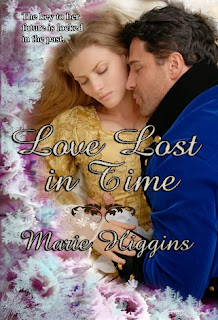 Andrew Merrick was whisked from his home in England, 1848 to another time, the very day a mob had attacked his family. Wondering why he remains in this strange place, all he wants is find the treasure his father had hidden, hoping this might take Andrew back home. But he’s running out of time. When he meets a lovely woman in this strange new era, he feels she is the one who will help him.

Halle Chapman has come to England to find her missing father. What she finds instead is a nice man who claims he’s from the past. Although she doesn’t believe in time-travel, deep in her heart, she knows she must help Andrew. What she finds instead is discovering the key to her future lies in the past. Now, to return to her own time, she needs to solve the mystery surrounding Andrew Merrick and his family’s murder.

A slight pound knocked against Andrew’s skull. What in the blazes was Miss Chapman talking about? “Why do you say that? I’ve heard you say it that way a few occasions. Pray tell, what does time have to do with it?”
“Believe it or not, time has everything to do with it. I wouldn’t be here if not for time. I would have never met you if not for time.”
Andrew rubbed his forehead, baffled.
She reached up and took hold of his hand, moving it away from his head. She kept it in her grasp as she ran her thumb across his knuckles. She was a bold woman to touch him in such a personal way. Yet it amazed him to think this small gesture softened his heart, and eased his headache slightly.
“My words are going to become very confusing here shortly,” she said. “I just want to make sure you are prepared for what I have to tell you. I desperately want you to understand what I’m about to say. It would kill me if you don’t understand or believe me.”
The pleading in her eyes let him know how important this was. Whatever she had to say, she struggled with it, yet she acted as if she wanted to deliver the news to him in a calm, gentle manner. “Tell me.”
Softly, her fingers stroked his hand. Her touch was so very tender. So soothing. Affectionate. And so very personal. A different emotion leapt inside of him, and once again, he received the impression they had known each other before, but he knew not where. Now as she touched him, peace settled inside him. He was not as confused as he’d been moments earlier, and it really didn’t matter what explanation she gave about her confusing actions. As long as she continued to gaze into his eyes and stroke his hand…he was fine.
Little by little, he became mesmerized by the passion in her green eyes—the way her gaze slid over his face slowly from the top of his head, to his eyes, his nose, and to rest of his mouth. The lovely color of her eyes darkened, which made the desire he had for this incredible, interesting woman kick up a notch. For a fleeting moment, nothing else mattered but holding her. This woman made his thoughts jumbled, yet all he wanted to do was close his eyes and enjoy her touch.
The moonlight peeked through the leaves and highlighted her hair, making the golden strands in her locks stand out more. It took all of his willpower not to pull the pins from her hair and admire the way her length tumbled over her shoulders in a seductive manner.
With his free hand, he cupped her face. She gasped, but then a dreamy sigh quickly followed as she stared deeply into his eyes. She even snuggled closer to his touch.
Never before had a woman’s reaction to his caress been so rattling, but he knew without a doubt Miss Chapman was attracted to him…nearly as much as he was attracted to her. He wouldn’t stop to question why things were happening so quickly. There was time for that later. Now, all he wanted to do was…
He moved his hands in a different direction as he circled them around her and pulled her up against is body. Her palms rested comfortably on his chest, and he was certain she could feel the quick beat of his heart. When her attention dropped to his mouth once again, his breathing became ragged.
“What are you doing to me?” he whispered, lowering his head. “And more importantly, why do I not want to stop this from happening?”
“Then let it happen,” she muttered before his lips silenced hers. 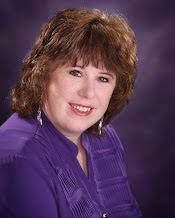 Since Marie Higgins was a little girl playing Barbies with her sister, Stacey, she has loved the adventure of making up romantic stories. Marie was only eighteen years old when she wrote her first skit, which won an award for Funniest Skit. A little later in life, after she’d married and had children, Marie wrote Church roadshows that were judged as Funniest and Best Written. From there, she branched out to write full-length novels based on her dreams. (Yes, she says, her dreams really are that silly.)

Marie has been married for twenty-eight years to a wonderful man. Together, they have three loving daughters and several beautiful grandchildren. Marie works full time for the state of Utah, where she has lived her entire life. Marie plans to keep writing, because the characters in her head won’t shut up. But her husband smiles and pretends this is normal.

Visit her website/blog to discover more about her – http://mariehiggins84302.blogspot.com