It is my pleasure to welcome romance author MJ Fredrick to Conversations today. She's here to talk about Christmas novella, Sanctuary with the Cowboy! So, check out the cover, blurb, and excerpt. And get to know MJ by checking out her interview too!

SANCTUARY WITH THE COWBOY 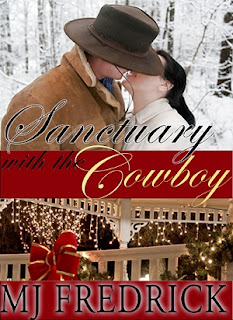 When an on-the-job incident sends her home to her family's Hill Country ranch, Detective Aubrey Cavanaugh wants to hide away with a good bottle of vodka to ease her mind and her guilt.

She doesn't want to deal with family, friends, and least of all her former lover, Erich Harlan, who is now the ranch foreman.

Erich Harlan has his hands full with overseeing the ranch while Aubrey's parents are away. But he can see she is hurting. He might be the last person she'd turn to, but he won't give up until he knows what's causing her pain and how to make it go away.

After a dozen years apart, will she be willing to find Sanctuary with the Cowboy?
Amazon / Barnes and Noble / Kobo / iTunes


Excerpt from Sanctuary with the Cowboy

Aubrey squinted against the bright light and the pounding. She dragged herself to the window and looked down at the driveway. The Ford F-250 that had picked her up from the airport was there beside her parents’ vehicles. She was sure Erich was the one banging on the door, but he was out of sight. She dragged the balcony doors open and stepped out to the rail.
“What the hell do you think you’re doing?”
Her own shout made her wince. He stepped back to look up at her, and damn him, he grinned.
“You look like shit.”
“That’s because I was sleeping.”
“Passed out, more like.”
She flipped him off.
“Get down here, Aubrey. I told you I’d take you to meet a friend. He’s waiting for us.”
“I’m not going anywhere today.”
“What, you’re going to sit inside and drink all day?” He looked at his watch. “Half the day, since it’s almost two?”
That gave her a jolt. Was it? She never slept so late unless she’d worked a long shift. She turned to look at the bedside clock. Despair sank in her stomach—her empty stomach. This was not who she was, but she couldn’t pull herself free. She didn’t want to be inside her own skin, so she sought oblivion.
When she turned back to Erich, he’d disappeared, though his truck was still in the drive. God, was that his voice she heard downstairs? Jen, the housekeeper who had kept her distance since Aubrey had been home, must have let him in. She flew into action when she heard his footsteps on the stairs, bolting for the door to lock it, but she was too late. He swung it open, dipping his shoulder as he strode forward, lifting her like a sack of potatoes without breaking stride. She shrieked in protest as her head flopped and her stomach roiled, but before she could catch her breath, they were in her bathroom. He reached behind the frosted blocks to twist on the shower, and hefted her to her feet, pushing her under the icy spray. Shocked and gasping for breath as the needles of water stole her breath, she tried to scream again, spitting mad, striking out at him. He pinned her against the wall with his hand to her chest, in the center of the HPD t-shirt she wore.
“Today I waited until two. Tomorrow, it’s nine. If that doesn’t work, the next day it’s six.”
“Don’t you have a job to do?” she snarled, ruining the effect when her teeth chattered.
“Yep.” He reached past her and turned the hot water on.

What is your guilty pleasure?

This time of year, Christmas movies. The more like a Harlequin, the better. The more actors I can name from years and years of watching TV, even better!

In my fictional world, some kind of alpha guy: soldier, firefighter, built and in-charge. In real life, not sure I could deal with all that testosterone, but it is so much fun to fantasize.

If you could time-travel, where would your first stop be?

I would love to go back in time to the hey-day of Route 66. Then I’d find a convertible and hit the road. Seriously, I want to stay in that teepee motel.

What is your favorite kind of chocolate?

Filled with caramel. Gooey, hard, I’m not picky! Peanut butter is good, too, but no nuts, thanks.

What is the one thing you hate to do?

Talk on the phone. It’s terrible! Recently I kept putting off calling a cleaning service (a treat, because I had family coming before Thanksgiving) and ended up having to clean the house myself, all because I didn’t want to call. That’s not to say I don’t always have my phone with me, but I prefer texting and email.

Do you still remember your first kiss?

Oh, yes. It was HORRIBLE. I was a freshman in high school and had never heard of a French kiss before (terribly sheltered) and Guy (his real name) had taken me to the rodeo, which wasn’t a cheap date. He got mad because when he kissed me (not well) I pulled away. He said, “Gosh, you aren’t very passionate, are you?” I was fourteen! :::shudder:::

What do you love most about being a writer?

I love creating characters. I love putting characters together with the last person they think they should be with, and I love making them see they were wrong! 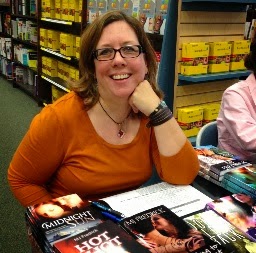 MJ Fredrick knows about chasing dreams. Twelve years after she completed her first novel, she signed her first publishing contract. Now she divides her days between teaching elementary music, and diving into her own writing—traveling everywhere in her mind, from Belize to Honduras to Africa to the past.

She's a four-time Golden Heart Award finalist, and she won the 2009 Epic Award with Hot Shot and the 2011 Epic Award for Breaking Daylight, and was a finalist for the 2012 with Don’t Look Back.