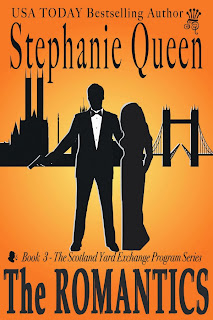 Saving royal damsels in distress isn't Joe's usual line of work, and after he's roped into the assignment, he realizes he isn't cut out for it.

Lady Veronica can't afford to be young and vulnerable since losing both her parents so recently, because now someone is out to scare her out of clearing her father's name and proving he was murdered. Joe is exactly who she needs--or so she thinks. But Joe can't help lying to Ronnie for her own good any more than he can help falling for her hook, line and sinker. Ronnie discovers she can't trust anyone any more--not even Joe, the dashing American pilot she'd come to adore. But walking away from him leads her straight into harms way and now Joe needs to face his biggest fear to save the love of his life.

Excerpt from The Romantics

Joe touched his earpiece out of habit. He swept a gaze over the roomful of golden people. The place looked the same to him as it always did for an event. The only difference tonight was that he was supposed to be one of those golden people—playing guest instead of security.
As he check-pointed the perimeter, his earpiece chirped to life with the unmistakable voice of his boss. Hell.
“Guests don’t wear ear pieces, Allario. At least not at my New Years Eve party. Take it out and meet me in the library.” The governor of Massachusetts signed off.
Double hell.
Joe moved without the hesitation he felt.  As he reached the library door, three women surrounded him.
“It’s almost midnight and you’re still alone, Joe. It’s a shame for a hunk like you to waste a romantic night like this –with no gorgeous gal on your arm? We need to fix that right away.” Grace flashed her dimple.
The contagious effect lifted a corner of his mouth in return. She was his favorite of the three, he realized. Warm, bubbly, light and deep all at once.  Not that he kept any illusions. He nodded at each of the women in turn. They were all lovely in their own distinctive ways. They all knew he was fond of them in spite of his reticence. He liked that. Grace’s husband, who was the director of the Scotland Yard Exchange Program in Boston, teased him about his reticence, but Joe figured keeping emotionally cool was a safe policy.
“How could I be in better company than with you three lovely ladies?” He went out on a limb, but in spite of his teasing note, he meant it. He meant his warm smile too. They were all striking.  And married to a trio of lucky bastards. He shook his head. He considered the three bastards among his best friends.
“You don’t fool me. You’d give your right pectoral for the right woman,” Pixie said.  Her redheaded bob swayed playfully around her face.  “I see a possibility staring at you from across the room right now.” She gave him a mischievous smile—the only kind she had.
The third woman of the trio, Madeline, the tall glamorous wife of his boss, laughed and assured him. “Pixie is right. That woman is a definite possibility.”
They were all glancing across the crowd in womanly assessment, but before he could turn to appreciate the possible woman, his boss, Governor Peter John Douglas, showed up as promised. He stepped behind his wife and enveloped her in a possessive embrace. Madeline leaned into him and Joe felt a spark of envy zip through him for their easy intimacy. Shit.
“Afraid I have other plans for our erstwhile bachelor Joe.”
“He doesn’t even get a midnight kiss?” Grace sounded disappointed on his behalf.
“No kiss, but he does get a flight to London. And a mission with the royal protective service.”
He didn’t know if it was the flying or the sudden prospect of a mission that caused his heart to triple beat, but he stayed cool and returned the steady gaze of the governor.
“Don’t tell me the royals ran out of men to watch out for their assets.” He thought he’d carried off his cool, but Peter raised a brow.
“This is a special assignment calling for an outsider to protect a damsel in distress—right up your alley, Joe.”
Joe said nothing and refrained from taking a deep breath. He even smiled without clenching his teeth. He hated flying. These days he figured if God wanted him to fly, his pockets would be filled with fairy dust and his name would be Peter Pan. 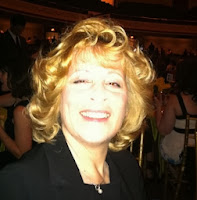 Stephanie Queen is a romantic at heart and a writer by nature with the enthusiastic soul of a cheerleader. She enjoys creating stories where her rose-colored world-view comes to life and the good guys always win. Having spent most of her life in New England, she's attended a few of the area colleges, including Harvard, and even earned a couple of degrees along the way. Although she lost count of all the jobs she had before she settled on being a Novelist, her favorite was selling cookies as a Keebler Elf.

Novels by Stephanie Queen include The Throwbacks, The Hot Shots and now The Romantics, her newly released book 3 in the Scotland Yard Exchange Program series of romantic suspense. All are available at Amazon, Barnes and Noble and iTunes. Visit the author at www.StephanieQueen.com, or on Facebook and follow her @StephanieQueen on Twitter.