Please welcome AAMBookclub author Blu Daniels to Conversations today. Blu is here to talk about her novel, Misconceptions. So, check out the cover, blurb and excerpt below! And don't forget to check out her interview too, and get to know Blu. 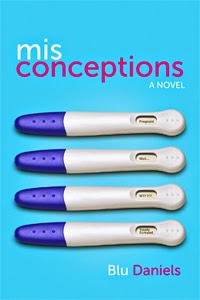 Having a baby is one thing. But having FOUR of them with the jerk who used you…now that’s another.

After finally ending her year-long fling with a man she only refers to as Bad Habit, the narcissistic, temperamental Alexandria Stone moves back home to New York to start her dream job. That is, until she discovers she’s pregnant, with quadruplets. When a business merger leaves her jobless and penniless, she has no other choice but to move to Atlanta with Bad Habit, a seductive, callous man she despises due to their rocky past. Desperate to have a picture-perfect life, Alex becomes convinced she must make Bad Habit fall in love with her, no matter the cost. Misconceptions is a hilarious and sexy nine-month chronicle of Alexandria’s doomed quest for a perfect life.

“If you keep eating like that you won’t have enough food to last the weekend,” Bad Habit said while coming down the stairs, carrying an overnight bag. I looked up from my plate of barbeque chicken wings, sucking the remnants off my fingers.
“And it’s only nine a.m.” he added while trashing the empty cartons of orange juice I left on the counter.
“I’m eating for five. Piss off,” I snapped, my mouth full of smothered meat. It had been weeks since I had a real appetite and now all I was craving was chicken. Mountains of chicken. Legs, thighs, wings, breast stacked to the ceiling.
He shook his head in disgust. “Weren’t you in the kitchen earlier this morning?”
He must be referring to the six packs of his favorite instant oatmeal I ate at four-thirty.
I nodded my head in between bites.
“You were asleep. I guess another looooong night. Humph!”
Bad Habit left for work every day like clockwork and he went out almost every night. A mixture of various undefined meetings, happy hours, and random fuckery kept him out late while I stayed home alone for thirteen hours a day. He ignored my side eye and zipped up his bag.
“I’m heading to Vegas for a conference this weekend. I’ll be back Sunday.”
“Sure, whatever,” I said with zero care while scavenging through the fridge with my sticky fingers.
I could’ve sworn we had some potato salad in here.
“You know,” he began. “Maybe you shouldn’t be eating so much.”
I froze and spun around, catching him checking out my ass.
“Why not?”
“Well, maybe you should…exercise a bit.”
My mouth dropped and the relief of the cold breeze from the freezer vanished.
No. He. Didn’t.
“Are you calling me fat?”
He shrugged while walking toward the pantry.
“No, but you have been eating a lot more lately. And aren’t you supposed to be taking some vitamins or something?”
“They’re horse pills. You take them. And quit changing the subject. You think I’m fat!”
“No, but…well…it may just help with your…anxiety.”
He took out the last pack of instant oatmeal and waved the empty box at me. Furious, I held my hands on my hips.
“Oh well gee thanks for the marvelous advice! Let me just unzip out of this fucking fat suit and go for a brisk run. Hmmm…can’t seem to find the zipper. You think you could help me out?”
Rolling his eyes, he grabbed his bag and headed for the door. I followed.
“Alexandria, it’s perfectly acceptable to engage in physical activity while you’re pregnant. Plenty of women do. I’ve seen them at the gym.”
“Yeah, well THOSE women aren’t the size of a damn planet at four months!”
You never ever call a woman fat, especially when she’s pregnant! Even callous bastards like him should know that much.
He stopped at the hall console to comb through an unopened pile of mail. I stood behind him.
“What, no response?”
Say something. Anything. Please give me an excuse to rip out your tongue with rusty pliers.
“Given your current condition, I’ve chosen to disregard your shenanigans as mere hormonal outbursts,” he said using his normal cold formalness.
He finds his car keys and turns around with a smirk.
Ugh. His audacity disgusts me.
“I may be pregnant, hormonal, and maybe even fat, but this is temporary. You however are a permanent dick! How about you try not to say or do anything stupid from now on?”
He grinned, amused by my outburst, and opened the door.
He thinks this is funny. So I’m a joke now?
“Alexandria, do you need another spanking?”
I gasped, mortified by what we did the night before and took a step back. He laughed.
“That’s what I thought. I wouldn’t mind, but I have a flight to catch. Be back on Sunday. Hopefully the food will hold out until I return.”
And with a smirk, he shut the door behind him.

What is your book about?

MISCONCEPTIONS is the story of a young woman, Alexandria Stone, who moves back home to New York, finally ending her year-long fling with a man she calls Bad Habit. She starts her dream job then discovers she’s pregnant, with quadruplets. When a business merger leaves her jobless and penniless, she has no other choice but to move to Atlanta with Bad Habit, a seductive.  Desperate to have a picture-perfect life, Alex becomes convinced she must make Bad Habit fall in love with her, no matter the cost.

MISCONCEPTIONS is a hilarious and sexy nine-month chronicle of Alexandria’s doomed quest for a perfect life.

Inspiration behind the Book

The Bad Habit in the book was loosely inspired by a real bad habit I had dated. He was horrible to me and for me, but yet somehow I found myself attracted, almost addicted to him. There are direct conversations had in the book that are verbatim of what was said in real life. One night, I had a dream I was pregnant with twins, and when I told him, it didn’t change the way he treated me or felt about me. When I woke up, I immediately dumped my Bad Habit. Even when he tried to occasionally hit me up, I’d declined seeing him. If that dream was ever a glimmer into my future, I wanted no part of it.

But then I thought, imagine if it was four babies…

Five words to describe the book

Chemistry: Bad Habit and Alex’s chemistry is palatable.  Their love/hate relationship creates the perfect friction to ignite their passion. From the very beginning, you witness it, experiencing the frustrating back and forth. (i.e that sex scene in the beginning…whewwwww!).

Dominance: Bad Habit has a control over Alex both in and out the bedroom. Most of the time, he appears to be uninterested in her, yet still craves authority leaving Alex left wondering why she loves him.

Insanity: Imagine being pregnant with quadruplets with a man who has been an asshole from the very beginning? How do you navigate that?

Hilarious: Alex’s humor and sarcasm helps her deal with the array of situations and hiccups she, at times, puts herself in. You’ll die laughing at her shenanigans.

Determination: Alex will stop at nothing to get Bad Habit, even at the expense of her self-respect, dignity and even her health.

Five Fun Facts about Character
Why is this book so relatable?

Every girl has had a Bad Habit. That one guy who’s like the unhealthiest of food you know you shouldn’t have, but can’t leave alone. Similar to the bad boy complex, attracted to the you just can’t stop yourself from seeing or dealing with him.

Since you’ve never been pregnant, what are some of the things you did to help you write this book?

I read a lot of baby blogs, books and watched some detailed movies. The funniest thing I did was attend a birthing class. It gave me a chance to really witness the humor in their struggles, like getting up from their seats and interview some expectant mothers.  I even pretended to be preggos and PUSH!

Next I’m writing the sequel to Misconceptions called BAD HABIT, as told by our favorite character we love and hate. Then I’ll finish the final chapter in their trilogy. 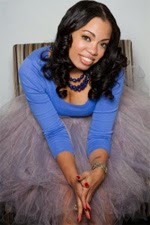 Blu Daniels is a TV professional by day, novelist by night, awkward black girl 24/7. A Howard University graduate and Brooklyn native, she is a lover of naps, cookie dough, beaches and randomly nerdy stuff. She currently resides in BK with her adorable chihuahua, Oscar, working on her next two novels.