Read Chapter One of WILD DAKOTA HEART by Lisa Mondello 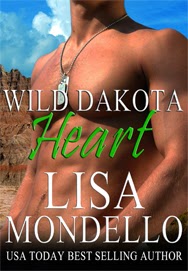 
Former NAVY SEAL, Ethan McKinnon, has spent ten years trying to wash away the bad boy reputation that ultimately resulted in the death of his best friend Denny Newton.  Unfortunately, that meant leaving behind everyone, especially Maddie Newton, Denny’s sweet younger sister. Ethan had faced sniper bullets and lived through black ops missions that he never should have come home from.  But facing Maddie again, and gaining her forgiveness, is the most terrifying thing he’s ever had to do.


Ten years of doing right didn’t erase one moment of stupid in the course of a man’s life.  Ethan McKinnon knew that more than anyone.  There were some things you couldn’t change no matter how much you wanted a do-over.  No matter how much you had changed.
Eight years of military service, most of them as a Navy SEAL, and the past year as a police officer, hadn’t prepared him for what he had to do in the next few minutes.
Facing Maddie Newton.
The sounds of his cruiser’s wheels on the pavement drowned out whatever thoughts cycled throughout his mind during the few hundred yards between seeing the red compact car plowed into the tree. He didn’t have to radio in the license plate to know who the driver was, making this stop all the more difficult.
Pulling the mic from the radio attached to his duty belt, Ethan called into the station.
“Dispatch, this is W17.  I’m at the scene of a one car accident on Buena Vista Road.  Vehicle is a red sedan.”  He paused to read the license plate and transmit it to the dispatcher.  “I’ll need a tow truck.  Checking for injuries now and will radio back if an ambulance is needed.”
“Copy that,” the dispatcher said.
Ethan pushed the door open and stood for a second with his heart lodged in his throat, choking him.  On pure adrenaline, he quickly moved his legs forward until he was standing just outside the driver’s side of the car.
He’d seen Maddie from afar while he was driving in town and then down at the shelter just after the ice storm hit months ago.  But he’d never ventured this close to her.
The last time he’d seen Madelyn Newton, she’d been crying.  She’d walked right up to him with half the town of Rudolph standing around them, her eyes lifeless and her body fragile with emotion.  Then she’d slapped him across the face, telling him she never wanted to see him again.  A few hours later, Ethan boarded a plane heading to Fort Benning, Georgia, so he could start the basic training that launched his career as a Navy SEAL.
That was nearly ten years ago.  Ethan had been back in Rudolph for nearly a year and he’d done everything possible to remain invisible to Maddie.  Until now.
Peering in through the window, he found Maddie slightly slumped over the deployed airbag, looking down at the red on her fingers. His mind focused on the red spot on the left side of her temple.
Blood.
Instantly, all his specialized training kicked in.  His senses came alive and he quickly scanned the immediate area.  The smell of antifreeze hung heavy in the air around him and steam rose slowly from beneath the hood of the car.  But to Ethan’s relief, there was no smoke and he didn’t smell gasoline.
As if just realizing Ethan was standing there, Maddie lifted her face and glanced up at him with a bewildered expression. Ethan opened the door and saw the red spot was now a streak trailing down the side of her face.  Panic hit him hard in the center of his chest.  He’d dealt with all types of emergency situations in his life, first as a Navy SEAL and now as a police officer.  But this was Denny’s kid sister!  And she was bleeding.
“Maddie?  Don’t move.  Just let me know if you’re hurt.”
She said nothing.  Her eyes were void of the lifelessness he’d seen the last time they’d been this close.  He’d braced himself for hatred.  Maybe even another slap across the face.  But Maddie just looked at him as if she were trying to piece the course of events that brought them there together.
“You just plowed your car into a tree.  Your airbag was deployed.  Do you feel any pain in your chest?”
She shook her head weakly.
“You hit your head during impact,” he said.  “Do you understand what I’m saying to you, Maddie?  Do you know who I am?”